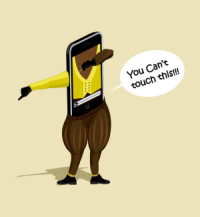 Handling touch events in SpriteKit is not as trivial as one might expect. Especially when two or more nodes are on top of each other. Which node will receive the touch event? In this article I will explain how touch events are handled and that this can lead to unexpected behaviour.

The next image is the configuration button in the expanded state.

Sounds easy enough, right?
For the buttons in my game I created a class ButtonNode (simular to this one) that extends SKSpriteNode and implements the methods touchesBegan, touchesMoved and touchesEnded so it can receive touch events. I added the buttons on the screen and added an SKAction to move the configuration bar to the right when the button is clicked. When I started the application, and pushed the button … I was redirected to the title screen??

Hope you guys found my page before hours of searching like I did. If I helped you with my article or if you have any questions, let me know.